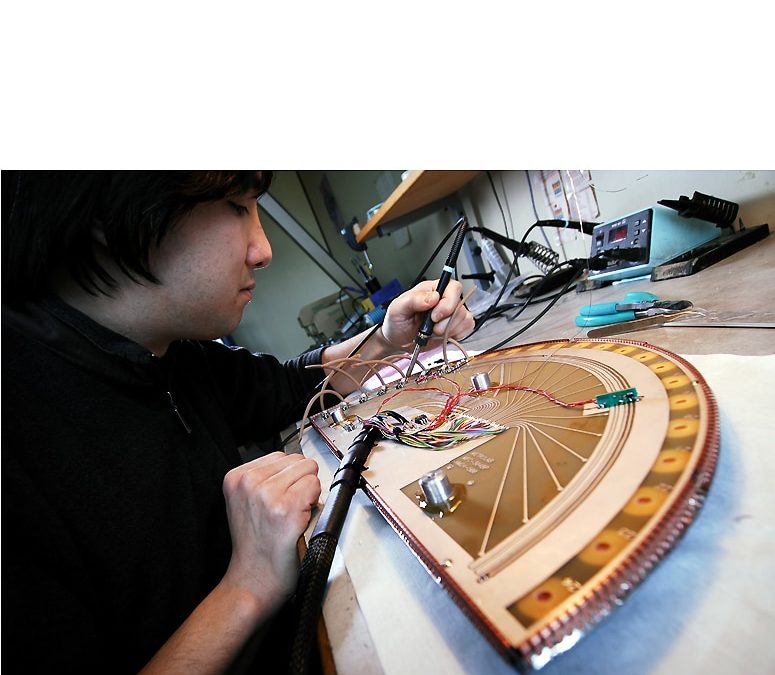 Metrolab’s magnetic field cameras (MFC) are now benchmark solutions for the high-precision mapping of intense magnetic fields and, in being perfected over the years, have gained the trust of all MRI manufacturers worldwide. We look back on a technological adventure that began nearly 20 years ago and is now seeing new perspectives opening up with the emergence of pulsed NMR probes.

Long-standing employees of GE, Philips or Hitachi still recall the days when MRI magnets were shimmed point by point, using a single NMR probe supported by an articulated arm that was moved manually over a period of several hours… when everything went according to plan. That was before the invention of magnetic field cameras (MFC), whose probe arrays now take simultaneous multi-point measurements with a precision of a few ppm in the space of five minutes. “In fact, compared with single point measurement, it was so fast that it was almost like taking a picture of the magnetic field. This is where the name Magnetic Field Camera comes from. Today, the vast majority of MRI machines currently in operation have been measured by an MFC,” reckons Pascal Sommer, Metrolab’s Technical and R&D manager. As we are about to see, the beginnings were more modest.

1980s, in the framework of a (discontinued) metrology programme for a particle accelerator. But the first industrial project came from MRI manufacturer Hitachi. “They wanted to map the magnetic field of their magnet quickly to get rid of the drift a

nd asked us for a solution for taking simultaneous measurements,” explains Pascal Sommer. Probe positioning calculations were carried out by Guy Aubert, who was director of the “Laboratoire National des Champs Magnétiques Intenses” (LNCMI) in Grenoble (France) – already collaborating with Pascal Sommer – and went on to become director general of the CNRS.

And thus the very first MFC came into being in 1991, in the form of a cumbersome barrel enclosing a spherical fixed array, its surface adorned with 41 probes arranged in 3D! A revolutionary concept that met the requirements but was costly and awkward to use.

With the arrival of “short” magnets, developed notably by Picker in the USA, to improve patient comfort, shimming became even more difficult. In response to these changes, Metrolab developed 24-probe semicircular 2D arrays that were made of foam-filled glass fibre composite, and rotated around an axis. They appeared on the market in 1992 with the name MFC3035. Among the problems they revealed were those related to normalisation of the probes (to take into account small discrepancies between them); even today, MFCs must be renormalized once per year, using a positioning device we call the “bed of holes”.

The concept was improved in 1996 with the development of a more robust chassis and connector technology. In addition to its three standard half-moons (400, 450 and 500 mm diameter), Metrolab used this as the basis for numerous customised geometries, either elliptical or with probes on the axis, with up to 32 probes. This second-generation technology, the MFC3045, continues to be the global standard for NMR mapping. 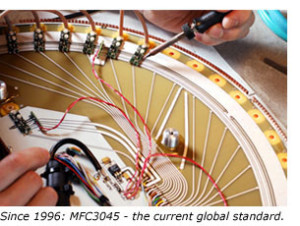 Pulsed probes: the future for MFCs

This could be about to change. Metrolab has been working for one year on new pulsed NMR probe concepts, using the re-emission of energy at the NMR resonant frequency – in contrast with the traditional continuous-wave probe, where the absorption of energy at the NMR resonant frequency is used to obtain the magnetic field value. “With this new approach we can build much more compact probes, because the electronics are separate,” stresses Pascal Sommer. A key space-saving improvement that paves the way to building MFCs geared to small MRI machines, which are increasingly being used to diagnose hand and leg injuries and in scientific experiments on small animals. The potential number of probes operated in parallel will be practically unlimited: with the pulsed technique each one is activated in succession at 10 ms intervals.

Another advantage of pulsed probes is that they break through the 7T barrier, which up to now had prevented MFCs from being used for very high-intensity instruments such as those operated at NeuroSpin. In general, “We obtain better performance levels at high fields with pulsed probes than with continuous-wave probes.” The timing is perfect: the market is now shifting towards powerful magnets with intensities frequently in excess of 3T.

Hence the next generation of MFCs will be based on pulsed probes. Indeed, Metrolab looks on this as its next challenge – and of course the new PT2026 concept will include this capability.